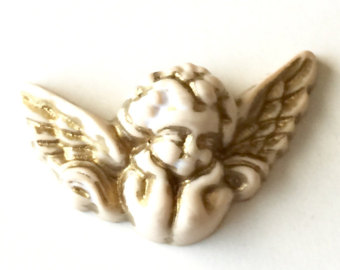 The porcelain brooch was first purchased by Evelyn DeMuere, who was widely known to have had odd and horrible taste, in 1893, at a small shop called Mollycoddle, at the corner of King and Varick. The toothy shopkeeper, Claire, was quite surprised to see it sell. It had been in the shop since she’d opened twelve years prior. Something that came from a donated box, probably the leftovers from a window’s passing. A few of the local doormen knew Claire to always be looking, and when boxes were left in the back corners of closets, instead of setting them on the street, they’d bring them to Mollycoddle.

Twice it led to rare and wonderful finds – a diamond ring, ornate and hand made, every detail more perfect than the last. It sold to a young man wearing a stripped bowtie who’d offered to take a daguerreotype of Claire in exchange, but she declined, of course – far too modest to ever allow herself such an indulgence. Plus, she was never very good at sitting still and had been told the process was quite uncomfortable. The young man paid asking price, a month’s rent for Claire, and gave the ring to a lovely young woman, who came in personally to thank Claire for such a beautiful ring. The other item of note that one of the doormen had dropped off was a tiara of silver and ruby. Claire described it as the most regal thing she’d ever seen. For the seven months, two weeks and five days it found home at Mollycoddle, she kept it perfectly polished and displayed it proudly above her favorite grandmother’s jewelry box. It was purchased by dreadful woman who argued the price and called Claire a “little woman.” She hated to sell it, especially to someone so vile, but she needed the money. And, to make herself feel better, she imagined that woman as merely the courier, bringing the perfect tiara to the wife or daughter of a kind-hearted Duke, who would present it to her in front of all her favorite people, on her birthday, with her favorite song playing in the background. She would twirl and glow in its radiance. And this made Claire feel better.

Evelyn was a regular at Mollycoddle, always purchasing the most ugly and odd items in the shop. Claire, for the first few visits, assumed she had a kitsch collection at home or perhaps a child who she would let play with the green and orange fake-pearl necklace or the locket with the broken lock or the red velvet shoes long since past their prime. But, one day, in walked Evelyn, wearing the necklace, the locket, and the shoes – this in accompaniment with a blue dress, a green belt, a bright white hat, and beige gloves. It was without a doubt the oddest combination of color, fabric and style that Claire had ever seen. She wanted to ask if Mrs. DeMuere was alright, but again, modesty prevented. Instead, she sold her “the most perfect brooch imaginable.” Which Evelyn proceeded to pin on her grey and fur coat right then and there.

As Evelyn walked from Mollycoddle down King Street, towards the water, she pictured giving the brooch to her granddaughter one day and her to hers and so on and so forth. She was so proud of the purchase. And as people gazed and gasped at the absurdity that was Evelyn’s style, she beamed with joy over each and every item. Something her later granddaughter, Eliza would mock incessantly.

“My grandmother has never worn a matching outfit in her life. And she loves it. The amount of time this woman takes getting into these amazingly awful combinations would literally put you on the rail.”

Eliza, of course, wasn’t much better in that regard. Times had changed, as had the allowance of wider and bolder style choices, but she too wore that revolting porcelain brooch with pride and joy. The small cherubic face staring into the hearts of anyone she spoke to. It was always mentioned in conversation, which is perhaps why she, her mother and her grandmother wore it with such pride.

Sadly, Eliza’s time with the brooch was short-lived. They’d been forced to leave their home in New York that Evelyn’s husband had purchased in 1897, just after Eliza’s mother was born. In attempts to find work, Eliza’s husband and brother set to move the family west. They made it nearly as far as Colorado when she went into labor.

Eliza hung on just long enough to hold and name her daughter, Virginia. “You take of your father. And you stay strong, my Virginia. I’m giving you that name because when we left New York, our first perfect night came as we entered Virginia. Your father and I sat on a tree branch, staring west, wondering what was coming and how we’d get there, and the sun went to sliver and shone so bright, right at us. And that’s you, my Virginia…” She looked at her husband, whose eyes burned with fear, and she placed the brooch on Virginia’s blanket. He nodded, knowing what it meant. And from that day until she started dressing herself at eight, Virginia’s father pinned that brooch to her every morning.

Much of the reason she took control over dressing herself was the angel shaped, now faded brooch. She, of course, loved it for what it was – her first and only gift from her mother. And she cherished it forever because of that. Just not as a fashion accessory. It lived on her dresser, next to a photograph of her mother that her father had had taken just before they left New York.

When Virginia passed the brooch to her daughter, Eve, she told the story of her mother’s passage from New York to Colorado and how it had been given to her the day she was born. Eve, the curious twelve year-old she was, asked “But where did your mother get it?”

Virginia paused, suddenly somewhat embarrassed and amazed, she wasn’t fully sure of the answer. She promised to find out and that evening, called her father, who had retired and moved back to New York. She asked if he knew where her mother had gotten the brooch. He laughed, having not thought of the number of nights Eliza had told him the story, in defense of her wearing of the oddity, in many years.

“That brooch was first purchased by Evelyn DeMuere, your great grandmother, who was widely known to have odd and horrible taste, in 1893, at a small shop called Mollycoddle, at the corner of King and Varick…” He told her the story of Evelyn and Claire, who had passed prior to Eliza meeting her husband, but whom had continually supplied the three generations of DeMuere women with gifts, knickknacks, jewelry, clothing and anything else she could right up until her passing. He told her, as Evelyn had told her daughter, as she had told Eliza and as Eliza had told him, it was Evelyn’s dream, on the very day she bought that brooch, that it would be handed down to her granddaughter and hers after that and so on and so on.

Virginia found herself crying through her smile as she listened to her father tell stories of first meeting Eliza’s mother and Evelyn, holding the brooch in her hand as though it were the memories themselves. She’d heard him speak of her mother so many times but never like this. He crackled with infectious laughter as he described the mismatching pantsuit Evelyn was wearing the night she first had him over to measure him up. Virginia, without even realizing she was doing it, found herself pinning the brooch to her robe, rubbing it with every chuckle and every detail her father shared. And Eve did the same when Virginia told her. As did Eve’s daughter, the night before she went off to college at Dartmouth, where the brooch followed and still lives today.

One response to “Evelyn’s Brooch”