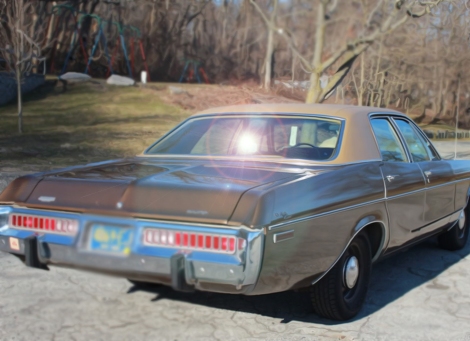 And yet another year had passed for Russell. He was a bit taller. His facial hair had continued to fill in. He’d replaced one pair of shoes and three shirts. He’d changed jobs twice. He’d tried three different diets at two different times. And his obsession with hard candy had, of course, maintained.

On the seventh floor of the highest building in Akron, Ohio, Russell took a deep breath. He tore the final calendar page off his Farside desk calendar and blew out the candle on his gourmet birthday cupcake. He then threw both in the trash.

Russell wasn’t lonely. He’d been lonely many times in life and was quite accustomed to the sensation (or lack there of, as it most often is). He wasn’t angry. His heart was calm. But as he stared at the demolished cupcake and the disappointing December 31 calendar page, he sunk. Deep and slow and for some reason, the world felt a bit darker.

What is this? He asked himself as he sat and stared.

A bird flew into the window and startled Russell out of his stillness. But not out of the darkness. What is this and where did it come from?

He’d been just fine a minute before, but suddenly his head was four feet below ground and his heartbeat seemed to echo deeply inside. Nothing made sense. Words collided as he attempted to read the billboard across the street. Usually it read, “Call Larry for all your legal needs.” Russell saw it as “Cjsosndhsoalnxbxjaklan.” I’m concerned, he said to himself. But he wasn’t.

He stood up and slowly walked past his Ikea couch, his K-Mart bookshelf, his Skymall space heater, and left his run-down, leaking studio apartment. He took the express elevator to the first floor. And he wandered out of the building, heading towards Larry’s billboard.

A car honked at him twice as he crossed the street. Then, a homeless man asked him for money. And an elderly woman asked him directions to his favorite home and garden store (though, of course, she didn’t know it was his favorite). He neither responded nor reacted to any of this.

What is this? He just kept asking himself that. Where did it come from? Why?

Russell was, in fact, so deep in thought as to what the cause of this overcast gloom that had infected him might be, not even the four-door 1973 Dodge Polara parked in front of Larry’s billboard could catch his attention. The Dodge Polara was produced from 1960 to 1973 and was then replaced by the Monaco, which was later replaced by the St. Regis, which wasn’t replaced. The Polara was Dodge’s answer to the Ford Galaxie 500, both failed attempts to make cars seem more “space-age.”

Russell’s father, a pharmacist, brought home a 1973 pale blue Polara on Russell’s ninth birthday. He called it “a good man’s car” and rambled on about Polaris, commonly known as the North Star, after which the model was named. Russell’s dad named that specific car, Harriet, after no one in particular. “Just seems like a Harriet. You want to take it for a ride?” It was the first time Russell held the wheel while his dad drove. Russell beamed, staring at the hood of the “good man’s car,” thinking just driving it made him one step closer to being one.

He thinks about that moment every time he sees a Polara; he thinks of his dad, wondering if he would’ve thought Russell worthy of such a car. Every time except that particular December 31. Russell was both in a cloud and buried deep beneath the Earth simultaneously.

As he neared the end of the block, standing directly below Larry’s billboard, he asked himself a question. Is this giving up? Is that what this feeling is? He stopped and let the question wash over him.

It couldn’t be, he thought. But at the same time, he’d never felt it before, so maybe.

That’s what giving up looks like, he said to himself. Then he felt bad. He didn’t know what circumstances led to that man being on the street. And who knows how he would react to life without shelter or demand. He walked towards the homeless man, who he could now see was wearing only one shoe and had a small cut on his left hand. He reached into his pocket, clawing for the two dollars he knew were there. But before he reached the homeless man, he saw the Polara. He thought of his father. And he knew the answer to his question.

No. No. This wasn’t giving up. Because Russell never would.

Six hours prior, just after purchasing his gourmet birthday cupcake, Russell’s new business partner, Cleveland, who hated his name, had shared some disappointing news about their venture. News that forced Russell to decide between doing what he wanted to do vs. being who he wanted to be.

He’d opted to do what he wanted to do, thinking it would make him somehow happy in the end, that the success would overshadow the disappointment.

It wasn’t loneliness or anger or giving up or depression he was feeling. It was shame. He’d swallowed so much of who he wanted to be in making that one decision, he’d lost the light he once saw the world through.

He started to laugh that a Dodge Polara, a shit car that was made for just over a decade and then replaced by two other shit cars, was what made him see the world again. That a car his dad fatally crashed two years after his ninth birthday had, in fact, brought Russell back to life.

He turned and handed the homeless man the two dollars. He caught up to and pointed the elderly woman towards Markerson’s (which to this day has the best selections of shrubbery available in Ohio). And he began to march back to his dilapidated apartment so he could become a man that might one day be deserving of a Goddamned Dodge Polara. To not choose simply doing but choose to do as the man he could be proud to be.

But first, there was a wounded bird that might need help somewhere around the corner, probably not too far from the bakery that, at the time, made Akron’s best gourmet cupcakes…

And yet another year had passed for Russell. He was a bit taller. His facial hair had continued to fill in. He’d replaced one pair of shoes and three shirts. He’d changed jobs twice. He’d tried three different diets at two different times. And he’d finally decided who he was going to be.

3 responses to “The Veil”