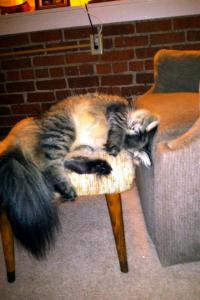 There was no doubt in anyone’s mind that Mrs. Barbara Hapsherd had killed her husband and his spotted ragamuffin named The Magician.  She had long since held a grudge against that cat, partially due to her husbands overwhelming affection for the creature compared to the mild regard he held for her, and partially due to his instance that the feline always be referred to as The Magician. And that it be said with a playfully mysterious tone.  He had, in fact, on numerous occasions, after Barbara had said the name out of anger or frustration, demanded she re-say it in a more pleasing manner. Needless to say, this drove Barbara crazy.

On nights Mr. Hapsherd worked late, neighbors stated to the police that they heard Barbara shooing the cat out of the house, calling him Maggie or, when she was really feeling bold, Madge.  One such neighbor, John Ellis, a work at home taxidermist and neighborhood snitch, said he had seen her, late at night, sneak out of her house, into the back corner of her yard, to smoke secret cigarettes. And then she would flick her butts at that dreadful little animal. He went on to say that, multiple times, her cigarette butts ended up in his yard. Lawrence Grishom, the town sheriff, didn’t bother to write that in his report and carried little concern over the littered filters.  He was quite used to incessant phone calls from John Ellis regarding the Thompson children walking on his lawn or listen to their music too loudly, about cars speeding down the one-way street that could be used as a short cut from the high school to Main Street, about Mrs. Critthow’s suspicious behavior when near sprinklers or picket fences, and about Mr. Jerrod, the pharmacist, overcharging for his prescriptions.  In fact, Lawrence had a more than mild appreciation for Barbara upsetting John Ellis’ delicate sensibilities.

The Women’s League of Milford, which was comprised of two Lydias, one Margret, three Alices, and a Penelope, all of whom were very close to Barbara, and had frequently lent their ears, shoulders, and cups of tea to her when she was in need of support, completely understood the now widows actions. And they sent a huge bouquet of flowers to the three-room police station located directly north of Penelope’s Flowers to show their love. Lawrence didn’t deliver them to Barbara. She was in holding, and even though the two were old friends, and according to John Ellis had once been “an item,” the sheriff was a serious man when it came to his responsibilities as law enforcement.  He did bring her a nice meal, which he cooked himself. Barbara enjoyed the rustic, manly meal of meat, potatoes and green beans. She recognized the combination of spices from her own recipe that she had given to Lawrence years prior.  It made her smile to know he had followed her culinary advice. More than that, though, she enjoyed eating a meal without The Magician perched to her right. Her husband, for years, had insisted the cat join them for every meal, and would, much to Barbara’s dissatisfaction and disgust, allow him to eat off of their plates. Lawrence also brought her a blanket that his sister had knitted, a very thick feather pillow, and a newspaper. Barbara told him to tell Lisa, his sister, that she loved the blanket, that her needlework was truly getting quite good. The compliment made Lawrence feel warm about his kin, who, at times, fell short of his expectations (though he always tried to hide those feelings from her). Barbara knew this.

Charles Hapsherd bought The Magician from a local Asparagus farm nine years earlier. He said it reminded him of his childhood best friend’s cat. As a boy, he had begged his parents to get him one, but his father, an attorney, never understood animal ownership. He viewed it as a poor investment.  It was sure to cost much yet eventually die. Barbara agreed.

The Magician, during his time in the Hapsherd home, destroyed throw pillows, curtains, bedding, and Barbara’s favorite apron which stated a simple request that whomever be cooking receive a kiss. She had not once, in her twenty-eight year marriage, tasted the fruits of wearing such a request.  A bed was built in her and her husband’s bedroom, so the four-legged terror could sleep near by.  Charles only once went so far as to invite the cat into bed with them. It was the first time he had ever heard his normally very mild mannered wife raise her voice, and with reason, as it was also when The Magician destroyed two hand-stitched throw pillows that Barbara had inherited after her mother’s passing.

Lawrence had to ask if she had done what everyone knew she did, even though he didn’t want to.  He bent down on one knee outside the old fashioned holding cell, his eyes half defeated, his heart heavy, and his hope to hear a truth that he knew didn’t exist as high as could be. Barbara saw him struggling to find the words. It reminded her of when he had tried to ask her to the winter formal their junior year of high school. He was so cute and nervous. And just as she did back then, Barbara took the lead. It’s okay, Lawrence. I killed him. I did it.  Lawrence’s reaction to being asked out by a doe eyed coed was slightly more jubilant than to hearing the confession of a dear friend who had just poisoned her husband and cat. But, he was still thankful for her rescuing him from having to ask.

Barbara had never been one to mince words. She spoke plainly and directly, leaving little room for feeling or questions. She took the aged lawman’s hand in hers, looked him dead in the eye, allowing all her feelings for him to be seen, and gave him a slight, reassuring smile. I didn’t mean to kill the cat, though. But, you know The Magician; he was never one to let Charles eat alone.

2 responses to “The Magician’s Death”