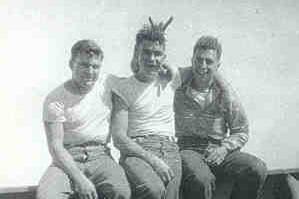 These are the true events of the night of January 3, 1995 between 2:17 and 4:03 am regarding the mysterious death of John Markham.

Ex Lieutenant John Markham was stirred from a peaceful slumber by what sounded like glass shattering.  He quickly jumped out of bed, reached into the safe that was, for some reason, already open, and grabbed the .38 that had been given to him by his first CO after his retirement.  He whispered his wife’s name, an old habit he not been able to break after her death.  His bare feet stuck to the noisy wood floors in the bedroom, so he slid on a pair of dirty socks that were sitting atop the hamper.  Quietly and smoothly, he crept down the hallway to the stairs and slid down the rail, thinking if there was someone down there, quickly and quietly was the best way to strike.

The first floor was colder than upstairs.  But, it usually was.  The old, stone laid fireplace didn’t seal completely, and the winter wind would frequently sneak through.

The living room and kitchen seemed peaceful.  No sign of break-in or damage.  “It must be the dining room,” John mumbled to himself.  Every breath, every movement, every step seemed to pierce the silence.  As he made his way through the meticulously organized designer kitchen that hadn’t been used in nearly two years, he grabbed his old Chef’s knife, again thinking quickly and quietly.

As he reached the swinging door that separated the kitchen from the dining room, he paused and collected himself.  His heart hadn’t beat this rapidly in years.  He worried the intensity could cause another stroke or possibly worse.  He focused on the picture of his wife holding their son just after he had been born that hung on the refrigerator.  His senile mind began to wander and questions of if the milk inside was still good or if he’d have to pick up a new carton before breakfast surfaced.  His training snapped his mind back into play.  He took a deep breath and pressed his ear against the door.  A single drop of sweat ran down his nose and fell to the cherry stained oak floor.  He could hear something, someone on the other side.  Could be an animal, he thought at first, but then he heard a voice and a shoe squeak on the antique floor.

John stood in stoic silence, awaiting the perfect moment to interrupt the assumed robbery that was occurring on the other side of his kitchen door.  His mind raced back to moments at West Point, in Kuwait, in Bosnia, in Kabul, and in his nightmares.  His grip on the knife tightened and his finger slid over the trigger of the twice-fired .38.  His heart slowed and the whole world seemed to slip into slow motion.  Another drop of sweat fell from his nose and before it hit the floor, John was through the door and scanning the room for movement.

The room was empty.  Everything was in its proper place and no signs of broken glass or intrusion could be seen.  John sat down and breathed loudly.  He placed his head between his knees.  He recited a poem his wife had taught him just after they met outside a high school baseball game.  His heart began to slow and swell.  He hadn’t thought of that poem in a very long time.  But the words seemed to roll of his tongue as though he said it every morning and night along with his prayers.  “Let us go then, you and I, when the evening is spread out against the sky like a patient etherized upon a table –“

His moment of peaceful memory was interrupted by another shattering glass.  This one was clear and rich and coming from the bottom of the stair.  John was up and on the move before any thought came into mind.  As he breezed passed his TV, he noticed the time on the cable box.  “3:12 am.” Weapons at the ready, John made his way through the living room back to the stair.  There was no glass.  There was no sign of anyone being there.  He began to worry that his mind was playing tricks on him.  He thought, perhaps he should just head back to bed and sleep it off.  Check things out in the morning with fresh eyes.  But then he heard his name along with a long, high pitched scratching, the type he remembered from boarding school, when the nuns would scratch the blackboard with their coarse, long fingernails.  His ears cringed and a shiver went through his body.  A cold gust of wind crept through the fireplace and shot up his legs.  Goosebumps covered his bare arms.

“Who’s there? Who are you, you son of a bitch? You think you’re getting out of here?”

The voice was a loud whisper and seemed to come from every direction.  John spun and twisted trying to catch a glimpse of movement or shadow.  He ran up the stairs, bursting in to his kid’s old rooms, his bathroom, his closet, the small office his wife had designed for him but that he had never used, because he preferred the desk in the bedroom.  There was no sign of anyone.  “Where are you, Goddamnit?” He tried to sit on the bed and convince himself it was all in his head.  His eyes shot across the room to the miniature grandfather clock that sat on the dresser.  “3:42 am.” His eyes were struggling to stay open.  Once again, he began to mutter the remaining lines of the classic love poem. “And would it have been worth it after all, would it have been worth while –“

A wave of fear shot down his back unlike any he had felt before.  His muscles tightened and his bones stiffened.  “Who are you?” he screamed.

“Then come out.  Come out and fight.  Come out and show yourself, you coward.  You hidden ghost.  What is this?”  Logic and reason no longer mattered to him and he began counting the rounds as he fired the .38 in every direction. Soon, the cold click of an empty chamber echoed through the smoky bedroom.  He flipped his mattress off the bed and knocked the bureau onto its side, creating a perfect corner bunker for him to take cover.  He knelt down behind and reached into the safe, grabbing the box of .38 rounds.  He refilled his retirement gift and waited for another sign.

Minutes seemed to pass like days.  He checked the time. “3:57 am.” He heard a knock from below and screamed something that couldn’t be made out.  It was a battle cry.  He heard the footsteps moving closer.  They were different that the ones from before.  Heavier, clumsier, timid and full of iron.  He didn’t care.  He was ready.  He took a breath and finished the poem.  He looked at the picture of his wife that had sat next to the bed, but when he flipped the mattress had been thrown to the floor.  He smiled as though she was there next to him.

He swore it came from the other side of the door.  He leaped up and opened fire.  His finger seemed to move faster and faster with every shot until, once again, the cold click was the only sound he could hear.  With the knife raised, he lunged towards the door. He burst through the hollow wood that was now riddled with singed holes.  The hallways appeared empty.  “Impossible.” John was sure there had been someone there.  He scanned the walls and the floor.  He turned and looked at the bedroom, the shattered door, the broken bureau, the disheveled bed, and the grandfather clock, which had been hit by a stray round and had stopped working at exactly “4:02 am.”

John collapsed onto his knees.  He grabbed his heart.  It didn’t hurt.  He just didn’t know what else to do.  He held it and wondered why and what had happened.  He fell all the way to the floor and slowly, while thinking of his wife, his kids, his long career and all of the nightmares, he quietly and quickly fell asleep.

3 responses to “The Real Nightmare”