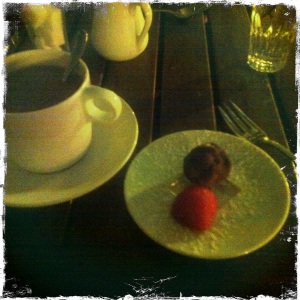 Danny has never really liked coffee. It’s black, it’s hot, it’s one of those things people call “an acquired taste.” A concept constantly lost on Danny. To him, that description could apply to a plethora of disgusting liquids (and solids, for that matter) that need not be mentioned. He’s always wanted to like coffee, having had, since some time around mid puberty, desired greatly to grow into one of those 1950’s style hard men; men that wake up at five in the morning every day, drink their black coffee, smoke their unfiltered Lucky Strikes, and consistently hide all sense of feeling and emotion (possibly excluding World Series, Superbowl, and Stanley Cup victories or defeats). In reality, Danny sleeps in as late as possible every single day, loves tea almost as much as hot chocolate (even the instant mixes), quit smoking after a short stint with cloves during college, and wears his emotions like a North Face down jacket. He’s been known to shed tears over movies, TV shows, commercials, stories, or just for the sheer enjoyment of the release. On many occasion, in fact, he has been complimented on this trait – being told it is a sign of his large, compassionate heart. And, most often, he cherishes this about himself. However, there are times, remised over the social stigma of the antiquated idea of what a man is, that he loathes his mid-pubescent control over his emotional state. He occasionally tries to put on a front, to play the part, to lay down every attempt he can to be that hardened man. It never works. Those men seem hard, but down deep there is goodness, honesty, and truth in their behaviors. Dan (as he likes to be called on such occasions) is simply a shell, a fake, a liar. As such, when he presents this guise, he simply comes off as an ass, leading him to, even though he knows some consider it a sign of weakness, apologize a lot. Because, no matter what, his big heart always breaks through the shell.

Danny’s first cup of coffee was an instant single pouch of French Roast. It was given to him by a basketball coach after an early morning practice in eighth grade. It was absolutely disgusting. He tried and tried to enjoy it like his coaches seemed to be, secretly adding sugar packet after sugar packet to sweeten the bitter darkness. Around the time it started to move similarly to the hot fudge he enjoyed pouring over his ice cream, the flavor became tolerable. Though, it could just be that he was reminded of his nightly hot fudge sundae and quickly finished the small cup of black, French death.

As the years passed, Danny tried time and time again to “acquire” the taste for the bitter morning treat so many people consider life-blood. The closest he came was when he met his fiancé. He was living in New York and she in Paris. She drank coffee like some drink water, averaging four to five double espressos per diem. It’s amazing what a guy will fake to get a girl to like him. He started drinking coffee daily because, on one of their first dates, she casually mentioned that coffee is sexy. Forget any fascination with becoming Don Draper, “coffee is sexy.” That’s all Danny needed to hear. He was hooked, though he still found it revolting. But as he would say, “it’ll make me enjoy everything else I’ll eat today.” Something a friend in college told him after it became “cool” to do all studying and writing in coffee shops. Danny hated it. His friends, on the other hand, found nightly havens at one of three local “non-corporate” coffee-houses that reeked of ground beans, stale cigarette smoke, and aged cedar tables. But they didn’t really drink coffee while there. They drank crazy roasted cocktails with names that sane people can’t pronounce or remember. Danny drank a lot of hot chocolate and developed a great relationship with Earl Grey.

It made no sense to him why he took the job. Aside from the unyielding need for income. Possibly years of working in traditional style restaurants led him to desire something slightly new but not completely different. So, after a lifetime of despising coffee, Danny, perhaps in a Bruce Wayne manner of facing his fear, took a job as a barista at one of Stockholm’s best cafés. He studied all the different names for basically the same combination of ingredients – cappuccino, cortado, latte, espressini, restrato, espresso, americano… Danny learned them all. He made them all. The java, the murk, the mud, the jamoke, the drip, the bean juice, the Juan Valdez, the octane, the hojo. He steamed the milk, he sprinkled the cinnamon, he wisped the foam, and, when it came down to it, Danny brewed one hell of a cup of Joe.

One response to “The Barista”